An important function of battery management system is to maintain the same state of charge (SOC) in the battery pack, which involves state equalization. The battery is manufactured within the specifications, but the voltage or SOC of the battery may not be as consistent when shipped from the factory. Moreover, like most other batteries, lithium-ion batteries can leak or self-discharge over time. For example, if the battery shipped with 3.7V and 100%SOC, by the time the cell arrived at the assembly, perhaps the SOC had dropped to 99.5%.

Why the battery management system need to perform battery equalization?

Large lithium-ion battery pack typically consist of hundreds or thousands of cells, and the SOC may be slightly different when the cells reach the battery assembly engineer. This may seem like a very small difference, but it can cause a lot of trouble when the battery system starts working. This is because the cell with the smallest SOC limits the battery pack’s ability to charge and discharge.

A simple example may help to understand the matter. For example, if we have three cells, two of which have the same SOC, and the no.3 cell has a slightly lower capacity, that is, the state of the group of cells is uneven. When all the cells are discharged with the same current, the no. 1 cell will reach its termination point earlier than the other two cells, and the battery pack will stop discharging, because continuing to discharge will damage the no. 1 cell. This means that the power in no. 2 and no.3 cell cannot be completely released, there will always be remaining battery power consumption legacy. With the increase of circulation, the batteries charging and discharging of SOC differences also increases, the weakest battery work harder than the other, eventually lead to the batteries premature failure, and even the whole battery system failure.

So it is very important to ensure that every cell is in the same SOC as possible, which is an important purpose and function of battery management system. Equalization means that the SOC of each cell in a battery pack reaches a similar level to maximize the capacity of the entire battery pack.

If the cells are connected in parallel, they are automatically equalized. However, each set of

For hybrid electric vehicles, battery equalization can theoretically be carried out during long periods of high-speed driving, because the battery is basically not used in that period. But that raises another question: how does the battery management system know that the car is on the highway and that it can balance the battery? By monitoring the speed of the wheels, it might be possible to determine the state of the vehicle, but you need to make sure the vehicle stays on the highway long enough to balance the battery cell.

We can use a graphic example to understand the method of cell equalization. Imagine playing a game in which there are three glasses on the table. You need to fill them with water and finally empty the glasses. But we have to follow some rules. First, you have to use special devices with channels so that all three glasses are filled with the same amount of water at the same time. Second, if one cup is full, stop filling it, no matter how full the others are; Third, they must use another tool to pour the same amount of water from three cups at the same time. Fourth, stop if one of the cups has been emptied. Start the game now and let’s see what happens. The initial states of the three cups are shown in Figure, which is analogous to the cells of different SOCs. 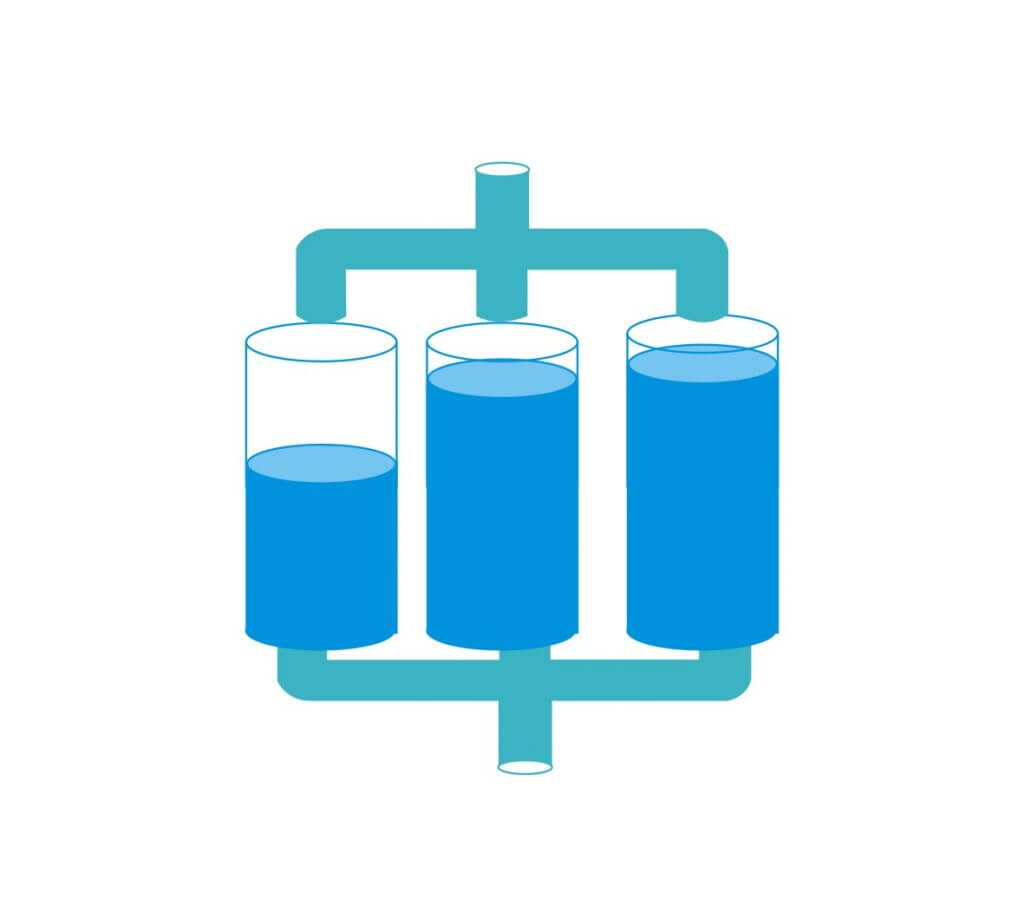 To better show the results of the game, we exaggerate the position of the water in the picture. The result, however, is obvious: when you start pouring water down the aisle into the glass, the last glass fills first. Now you can see that the other two glasses still have room for water, especially the first glass is nowhere near full.

As you can see from this game, there are two ways to achieve cell equalization. One way is to pour some water from a full glass. The other way is to transfer water from a full glass to a glass with less water. Similarly, there are two ways to equalize the cells in a lithium-ion battery pack. The biggest difference between the two methods is what to do with the energy of the cells. In the next section, we will describe these two approaches, called active and passive equalization.

In passive equalization, excess energy in a high SOC cell is consumed. There are many ways to consume it, but the most common use is to convert excess energy into heat using electrical resistors. Of course, this means assembling resistors of the right size into the slave circuit board that monitors the cell. A single resistor is usually used to equalize all the cells, although the equalization of the cells is not done simultaneously.

Advantage and disadvantages of passive equalization

Active equalization：excess energy be transferred to a low SOC cell

Advantage and disadvantages of active equalization

The advantage of active equalization is that excess energy is not wasted, but transferred to other cells. However, the downside of this approach is that the equalization process requires complex hardware, which not only increases the cost, but also takes up battery pack space. In addition, each cell needs to be electronically connected or a group of cells linked to a slave circuit board as a whole.

Other functions of battery management system

In addition to balancing, battery management system has many other important functions. For example, an energy storage system without equalization can still function, although capacity equalization has a significant impact on battery pack life. However, monitoring the temperature and voltage of the cell and battery pack is critical to the safety of the system. Therefore, one of the core tasks of battery management system is to ensure that the battery system and cell work in a safe state, including monitoring the current of the battery pack, the voltage and temperature of the cell.

Monitoring the current of the battery

Finally, the battery management system can also decide when to turn on and off the contact in the system, that is, to control the current flowing from the battery to the motor, or from the charging system to the battery for charging.

Software, the controller behind battery management system, controls everything. Most manufacturers regard software as the core technology, because it controls the entire battery management system. Most of the hardware can be based on off-the-shelf components, but the software requires personalized design, not only consisting of thousands of lines of programming code, but the code may involve many algorithms. The control software uses a series of mathematical formulas and calculation methods to understand the various states (SOx) of all batteries at different times, such as the current available energy and power, the current SOC, how much SOC is left, how long battery life is left, etc. This algorithm is usually based on very complex models, and is based on some kind of system and structure of the cell.

In most cases, A battery management system designer will study a running cell in a controlled laboratory environment to understand how it works under different conditions and then translate it into code. Through a series of repeated steps, it is possible for software designers to eventually devise an algorithm that accurately predicts the cell’s performance under most conditions.