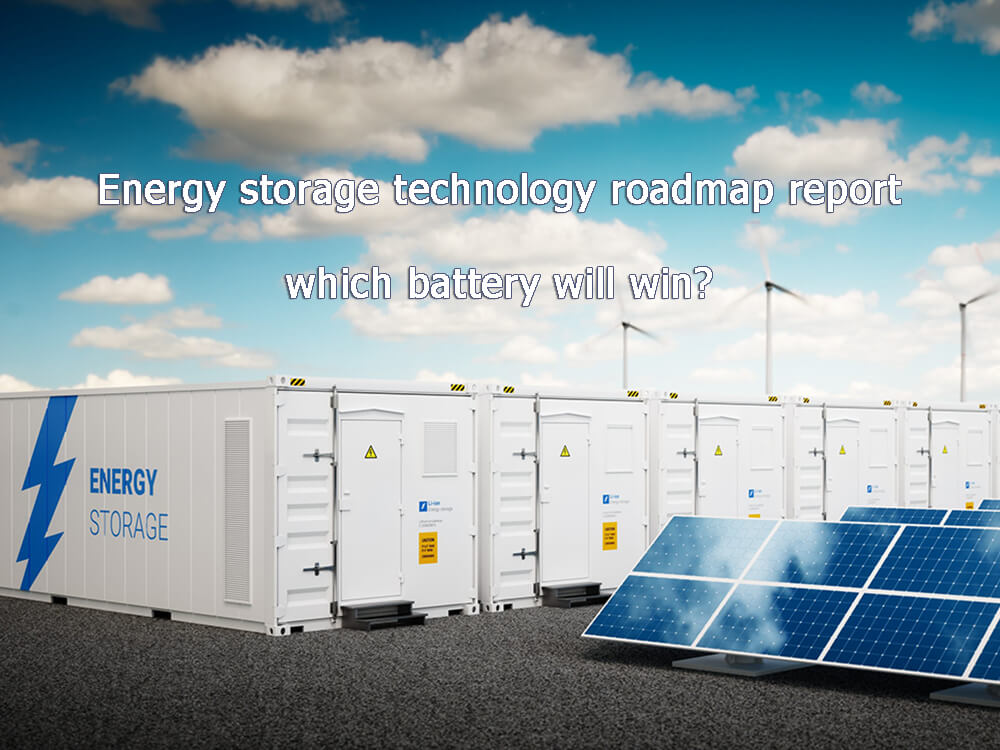 Learn from the development history of photovoltaic and national energy storage technology.

With the large-scale access of new energy sources, in order to overcome the intermittency and volatility of wind and photovoltaics, the entire power system is transforming from “source-grid-load” to “source-grid-load-storage”, and energy storage technology will become a new type of power system. the fourth essential element. Energy storage technology is currently mainly concentrated in two forms of pumped storage power plant and lithium-ion battery energy storage, like the recently popular 51.2v 200ah powerwall lithium ion battery：

The prosperity of photovoltaic power generation is at the same frequency as the policy orientation, and it is highly dependent on subsidies. In 1990, Germany formulated the “1000 Roof Plan”, which opened the prelude to the development of its photovoltaic industry;

In 1998, the government further proposed the “100,000 Roof Plan”, which greatly stimulated the German and global photovoltaic industry. 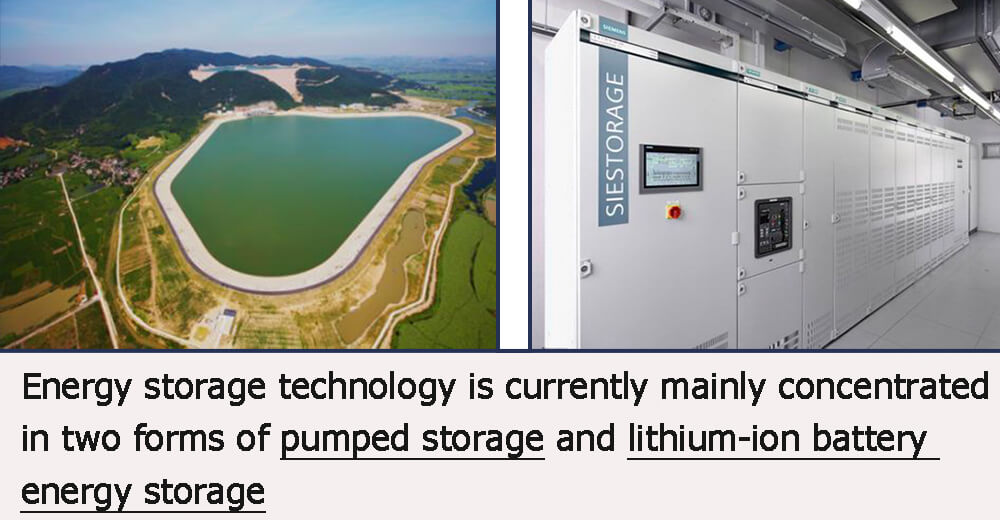 In 2000, Germany passed the “Renewable Energy Law”, and revised the Act three times in 2004, 2008 and 2012, clarifying the mandatory on-grid tariff for photovoltaic power generation, which led to the rapid growth of Germany’s photovoltaic installed capacity and became the world’s photovoltaic industry in one fell swoop. benchmark country. 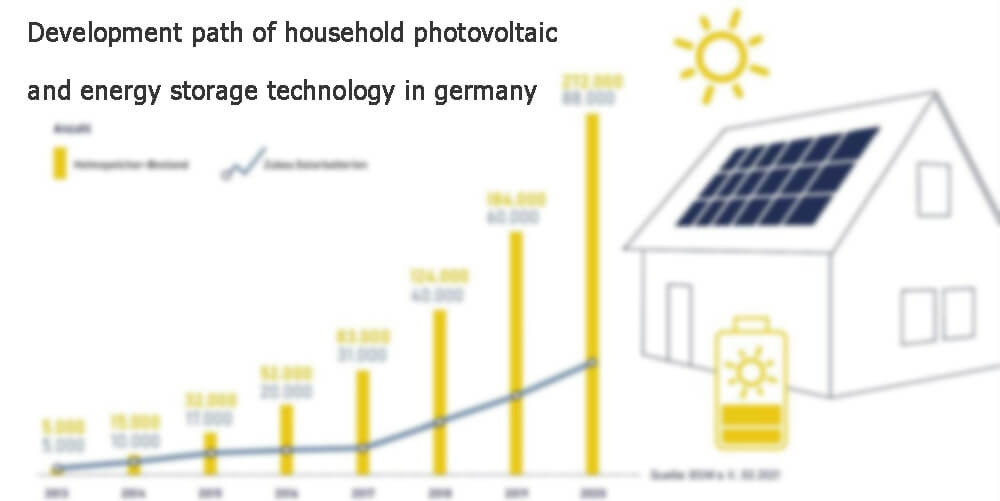 According to statistics, by the end of 2020, nearly 70% of German household photovoltaic power generation projects are equipped with battery energy storage technology systems, and the installed household energy storage capacity has exceeded 300,000, with a single-family scale of about 8.5kWh.

With the increase in the proportion of energy storage on the electricity side, the ratio of installed power and capacity of electrochemical energy storage in Germany tends to be 1kW/2kWh.

Calculated based on the roof area of 200w/square meter for household rooftop photovoltaic and 100 square meters/household, the installed capacity of single-household photovoltaic system is about 20kw.

Mainly based on the rapid growth of photovoltaic installed capacity

Photovoltaic power generation in the UK:

In April 2016, the Renewable Energy Obligation Act (RO) subsidy for all PV projects ended; in 2018, the UK ended its support for rooftop solar projects.

The average configuration time of the front-mounted energy storage meters in the UK is nearly 1 hour, which mainly plays a role in improving the flexibility of grid connection (energy time shift) and grid stability (ancillary services). 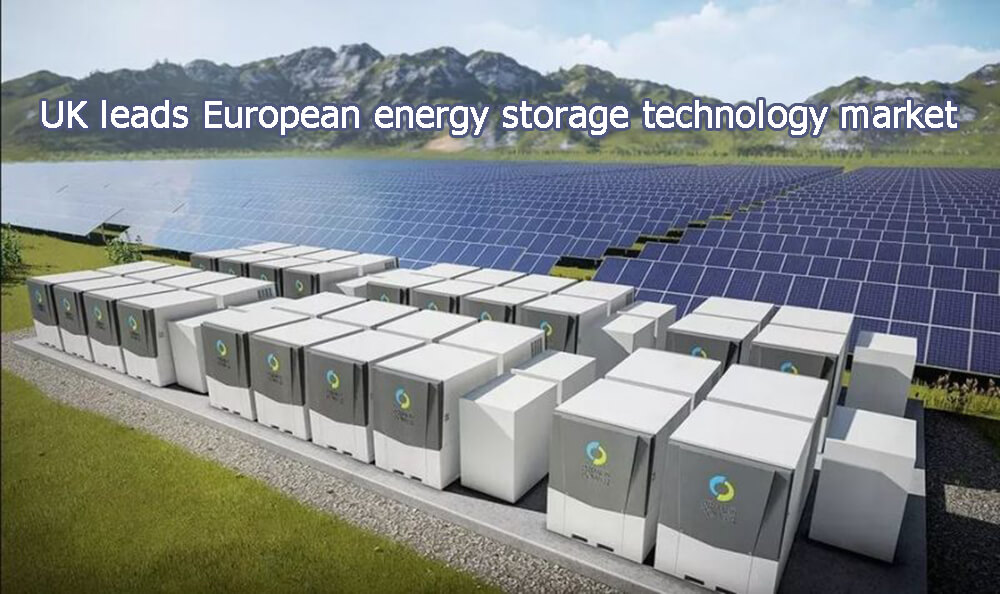 Based on the development history of photovoltaic energy storage technology in Germany, the installed capacity of distributed energy storage is mainly based on the electricity consumption of industrial enterprises and the difference between peak and valley electricity prices, reflecting the economy.

Policies catalyze the development of the industry: 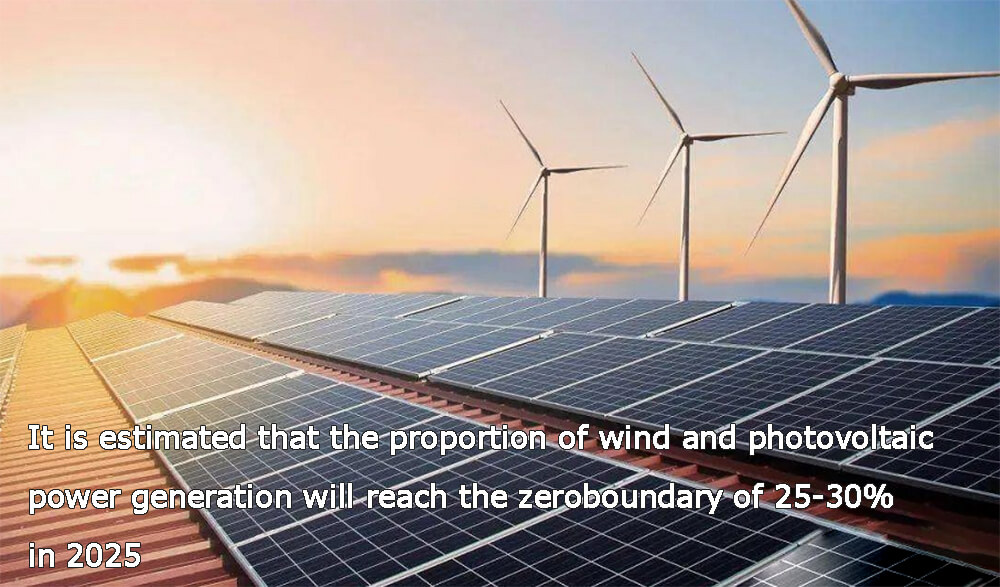 The road to industrialization of sodium power is smooth

The sodium-ion battery is mainly composed of a positive electrode, a anode, a separator and an electrolyte, and is basically compatible with the production equipment of lithium-ion batteries, which reduces the difficulty of industrialization.

The best application of sodium ions in energy storage technology

The abundance of lithium is low, with a crustal abundance of only 0.006%, and most of them are concentrated in South America, causing supply anxiety for major battery manufacturers.

According to the calculation of the sodium electricity leader Zhongke Haina, the sodium-ion battery material has a significant cost advantage, which is about 1/3 lower than that of the lithium iron phosphate battery.

1)The sodium resource is abundant, the price is low and stable, and the price will remain at 1000-4000 RMB/ton in 10 years.
2)Element selection is cheaper;
3) The hard carbon and soft carbon used in the anode have lower process requirements, lower power consumption, and have low-cost potential;
4) Inexpensive aluminum foil for the anode current collector. 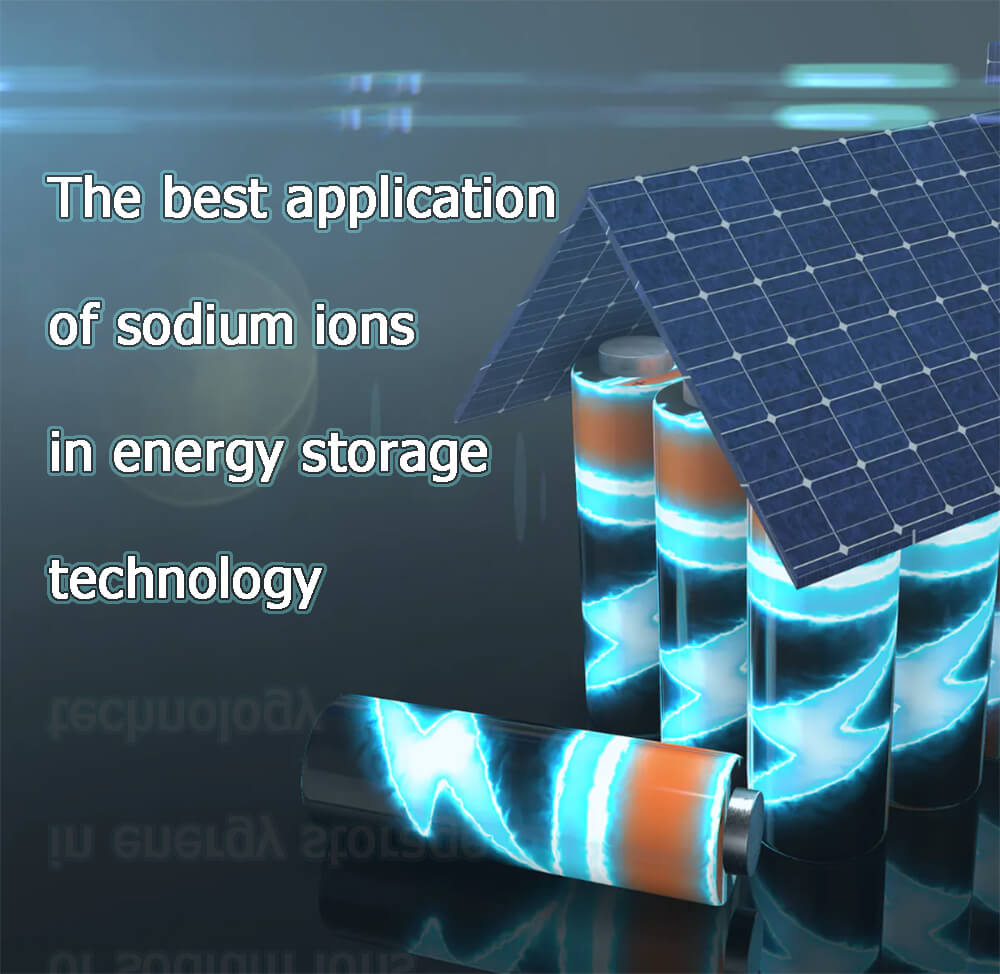 The energy density of sodium ions is basically the same as that of lithium iron phosphate, and the wide temperature range and safety performance are better.

The energy density of sodium-ion batteries is better than that of lead-acid, and is basically the same as that of lithium iron phosphate.

At present, the energy density of commercial sodium-ion batteries is 100-160 Wh/kg, which is significantly higher than the 30-50 Wh/kg of lead-acid batteries.

It is 10%~20% lower than the mature lithium iron phosphate battery, but it can achieve 200Wh/kg under the experimental conditions of sodium ion battery. Wide temperature range to widen alpine application scenarios. The applicable temperature is extended from -40 to 80°C. For a detailed comparison of the two batteries, please refer to lithium vs sodium battery.

The structure of the sodium-ion battery industry chain is similar to that of lithium batteries, including upstream resource companies, midstream battery materials and cell companies.

Battery companies have been laid out one after another, and the Ningde era has promoted the formation of the industrial chain. At present, many companies including CATL, Zhongke Haina, Nai Innovation Energy, Penghui Energy, and Sunwoda have deployed sodium-ion batteries. 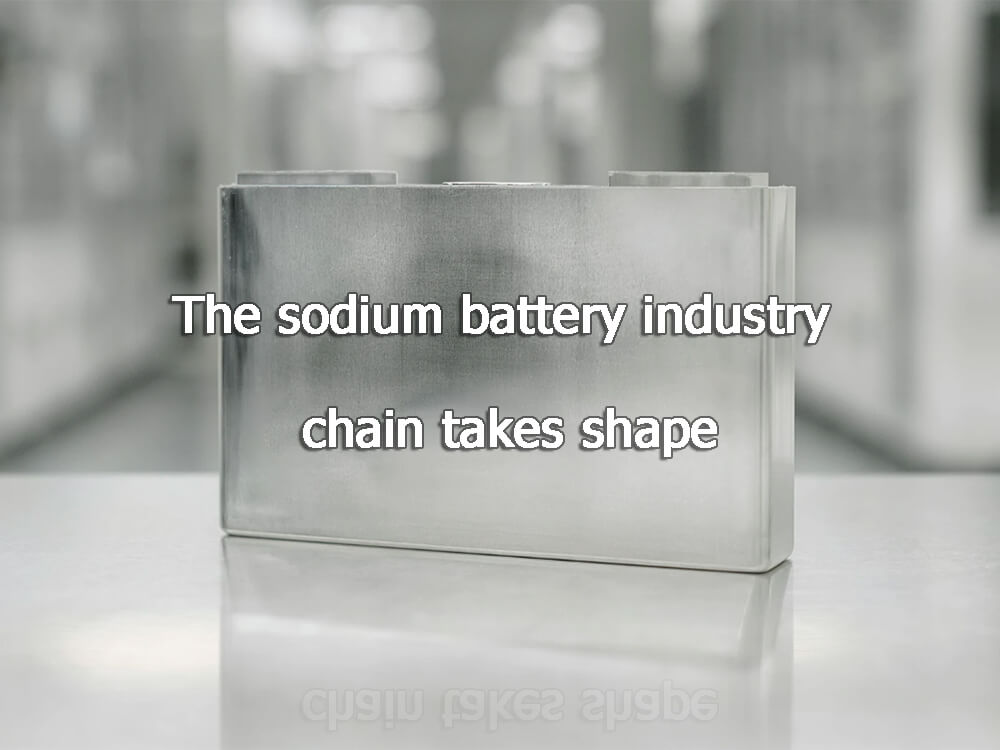 The difference of anode

Hard carbon materials are considered to be the anode materials with the most commercial potential for sodium-ion batteries due to their high specific capacity (about 300 mAh/g), low sodium storage voltage (the plateau voltage is about 0.1 V), long cycle life, and a wide range of sources. .

Therefore, it is necessary to reduce its internal defects by improving precursors, improving synthesis conditions, etc., to prepare hard carbons with low porosity and fewer defects.

The specific capacity of Bertray’s hard carbon and soft carbon anode materials has reached 400mAh/g, breaking through the theoretical limit of graphite anode, with excellent low temperature, rate, cycle and safety performance, but there is still room for improvement in the first week efficiency, and the vibration Low density is not conducive to the improvement of battery energy density.

Due to the early industrialization of hard carbon and soft carbon anodes, the raw material choices of domestic and foreign manufacturers are still tending to be diversified.

The downstream demand continues to grow, and the rise in raw material prices under the game of supply and demand is a foregone conclusion. The cost of anode material manufacturers is under pressure. Whether the pressure can be transmitted to downstream battery manufacturers depends on the bargaining power of enterprises based on technical barriers and customer resources. 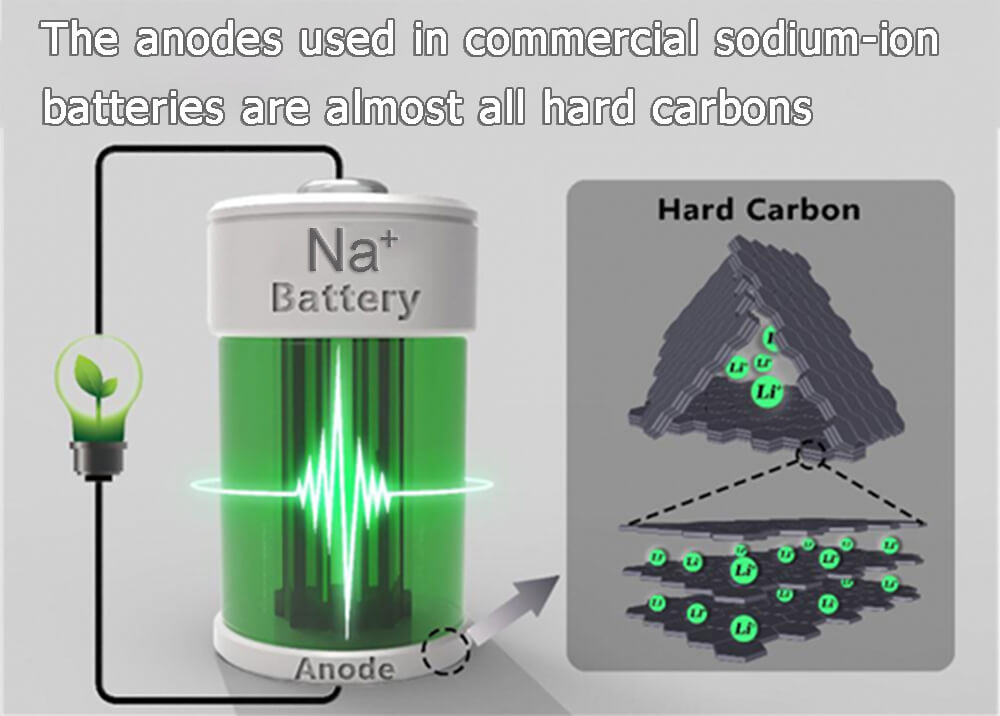 The unit consumption may vary with the difference in the proportion of petroleum coke and needle coke. Except for high-end artificial graphite, which mainly uses needle coke, the specific ratio of the raw material consumption of other negative materials of different qualities is unknown.

Phenolic resin molecules contain a large number of aromatic rings, and the residual carbon rate is higher than that of other macromolecules.

Whether it is soft carbon or hard carbon, since its temperature and time requirements are far lower than those of artificial graphite, the cost structure can refer to natural graphite, and the manufacturing cost (including electricity and energy consumption, etc.) after large-scale industrialization may be slightly higher than that of natural graphite (manufacturing The cost is 0.22RMB/ton). 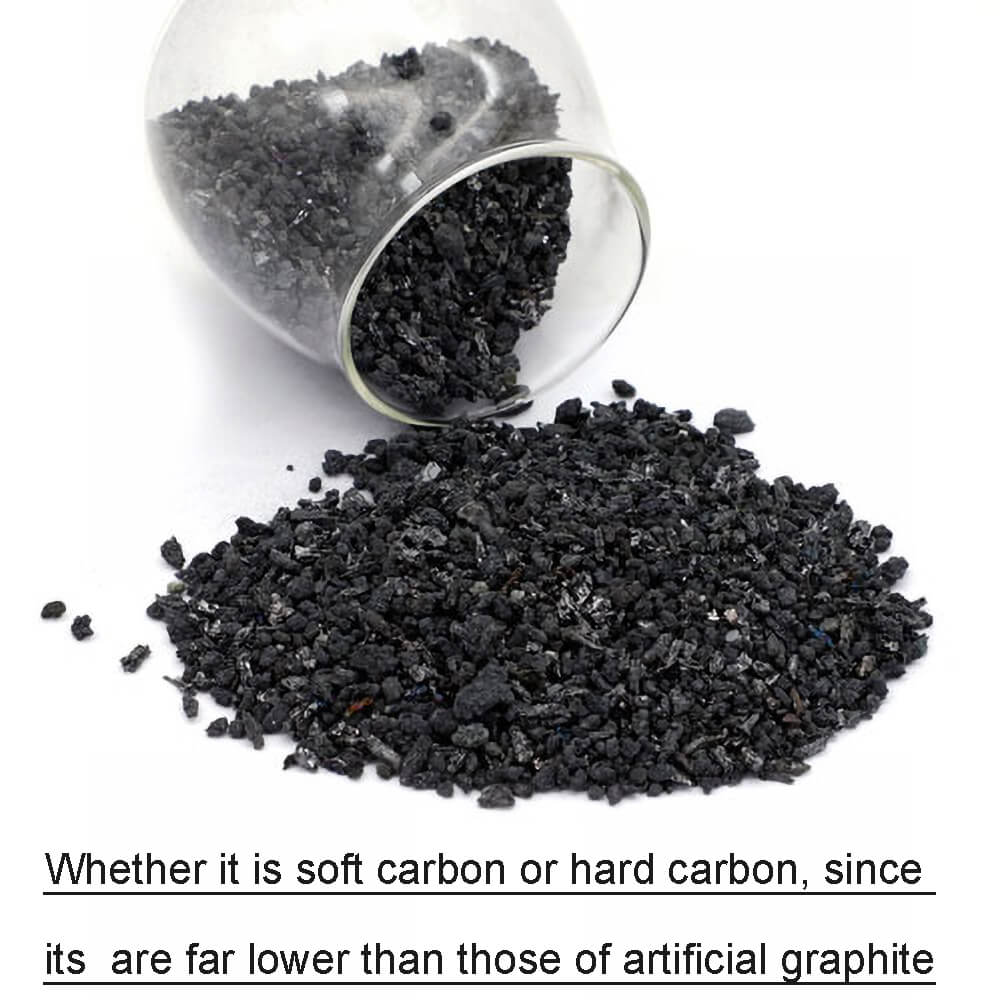 In addition to the general advantages of flow batteries, there are three advantages:
(1) Environmentally friendly All-vanadium redox flow battery is fully enclosed and operates with almost zero emissions.
(2) High residual value The vanadium element in the electrolyte is not lost, and the residual value is about 70%.
(3) Convenient recovery The electrolyte contains only a single transition metal, which is easy to extract. Miniaturized all-vanadium flow battery for use with household photovoltaics. The volume is 3-7 times that of lithium batteries.

The stack is the core in the modular structure

The structure and principle of the all-vanadium redox flow battery is similar to that of the hydrogen fuel cell. The stack is the core component of the system, where the electrochemical reaction occurs and electricity is generated. The electrolyte or hydrogen is stored in an external storage tank.

In view of the small output power of a single battery cell, in practice, the overall output power is usually improved by stacking multiple cells in series to form a stack.

Taking the hydrogen fuel cell as an example, the stack is a composite assembly composed of bipolar plates and membrane electrodes alternately stacked, with seals embedded between the monomers, and the front and rear plates are pressed and fastened with screws.

Hydrogen fuel cell stacks are the core value of fuel cell systems, and Chinese electric stacks have shortcomings in terms of lack of core materials and key technologies.

Among the vanadium-hydrogen shared materials, the graphite bipolar plate has basically been produced in China, and the proton exchange membrane and the gas diffusion layer are still mainly imported. 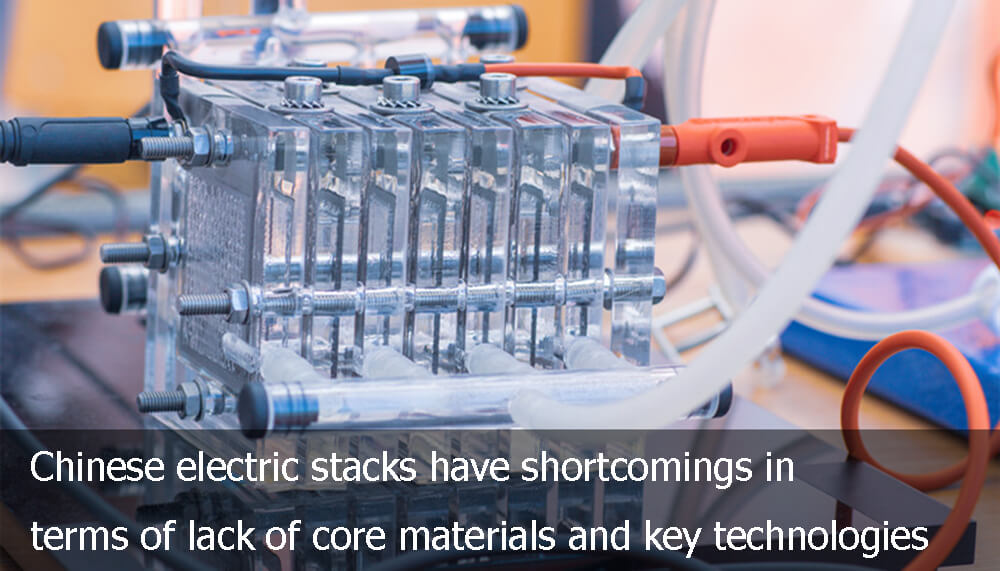 In the preparation of carbon paper, the technical difficulty is mainly reflected in the refining/beating link. In this link, the degree of beating needs to be controlled to ensure that the length of carbon fiber cutting is moderate. The material selection and ratio of solutions such as binders and dispersants will affect the Properties of carbon paper.

The leading companies are Toray in Japan, SGL in Germany and AvCarb in the United States, among which Toray and SGL are all in the carbon fiber industry chain.

The mainstream technology is perfluorosulfonic acid proton exchange membrane. PEMs tend to be thinner gradually, from tens of microns to tens of microns, reducing the ohmic polarization of proton transfer to achieve higher performance.

Chemours and Gore in the United States, the latter with the most abundant product series and the most practical application cases, are the leaders in the automotive fuel cell market. China is mainly the future of Dongyue, which is characterized by a complete fluorine-containing fine chemical industry chain.

The degree of Chinese production:

In 2020, the market size of China’s hydrogen fuel cell bipolar plate will reach 310 million yuan, and the market share of graphite plates (including carbon-plastic composite plates) and metal plates will be 65% and 35% respectively. The plates tend to be evenly divided.

The metal plate is basically ignored, and even the coated metal plate is difficult to work stably for a long time in an acidic liquid environment. Graphite bipolar plates (machined) are not favored because of the complex and expensive machining process.

Vanadium redox flow batteries mainly use carbon-plastic composite plates, because their thermoplastic or molding processes are relatively simple to machine, but the increase in resistivity caused by mixed polymer resins is still a problem that needs to be solved.

Due to its high corrosion resistance, high durability, and relatively low technical barriers, it is the first to achieve Chinese production, and it is demonstrated in the field of special vehicles and commercial vehicles that are less sensitive to volume but sensitive to durability.

Poor corrosion resistance and short life are obstacles to its application. However, with the continuous progress and breakthrough of the coating process, it is expected to achieve the same service life as the graphite plate.

With its excellent mechanical properties, high volume power density, low cost and easy mass production, metal bipolar plates will catch up in the process of large-scale application in passenger cars.

The degree of densification, the aspect ratio of the flow channel is higher, and the layout is smaller, which can enable the single board to support a higher power density, and reduce the number of boards required per kW, thereby reducing the difficulty and cost of stack integration.

Toyota Motor Corporation pioneered the use of metal bipolar plates and coatings on its Mirai fuel cell vehicle, addressing a range of issues including corrosion, cost and electrical conductivity.