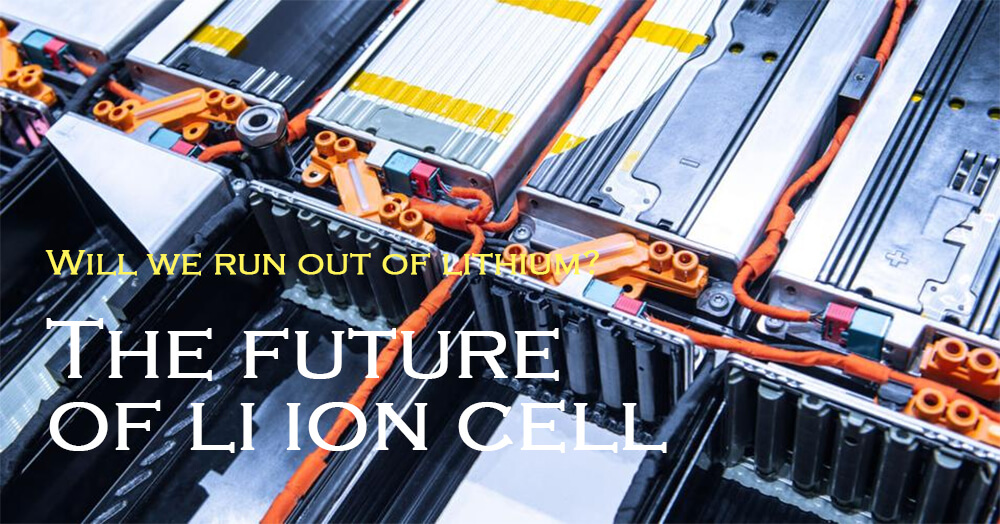 Home » lithium ion battery knowledge » Will we run out of lithium? The future of li ion cell

Will we run out of lithium? The future of li ion cell

In 1973, The British chemist Whittingham used titanium disulfide with layered structure as a cathode, with lithium metal as a anode assembled into a battery, the development of contemporary li ion cell beginning from this.

Then Akira Yoshino applied a layer of graphite to the anode, setting the modern li ion cell on the road to widespread commercial use.

The 2019 Nobel Prize in Chemistry has been awarded to Whittingham, Goodenough and Akira Yoshino for their invention of layered, spinel-like anode and cathode materials that have contributed to the success of li ion cell.

The structure of li ion cell is similar to Hamburg

Anode use carbon materials, such as the petroleum coke, the cathode use of layered materials such as metal salts, intermediate for li ion electrolyte and the diaphragm, is the main form of li ion cell, structure similar to Hamburg:

The anode and the cathode are like two slices of bread, with the chicken between them acting as an electrolyte that conducts li ions and a membrane that blocks electrons.

The energy stored in li ion cell is mainly determined by the amount of li ions that can be stored by the cathode and anode materials.

Li ions need to be embedded in layered materials for storage, which will occupy a large amount of mass and volume in the cell, resulting in low energy density of the cell.

The people who work here are li ions. Moreover, the more space each worker takes up, the fewer people can fit into the building, and the lower the overall profitability of the company if each worker is equally productive.

Cathode materials for li ion cell: a contradiction between safety, cost and capacity

li ion cell is useful, but their limited capacity and slow charging speed have failed to keep up with the growing demand for battery capacity and power in today’s electronic information age. 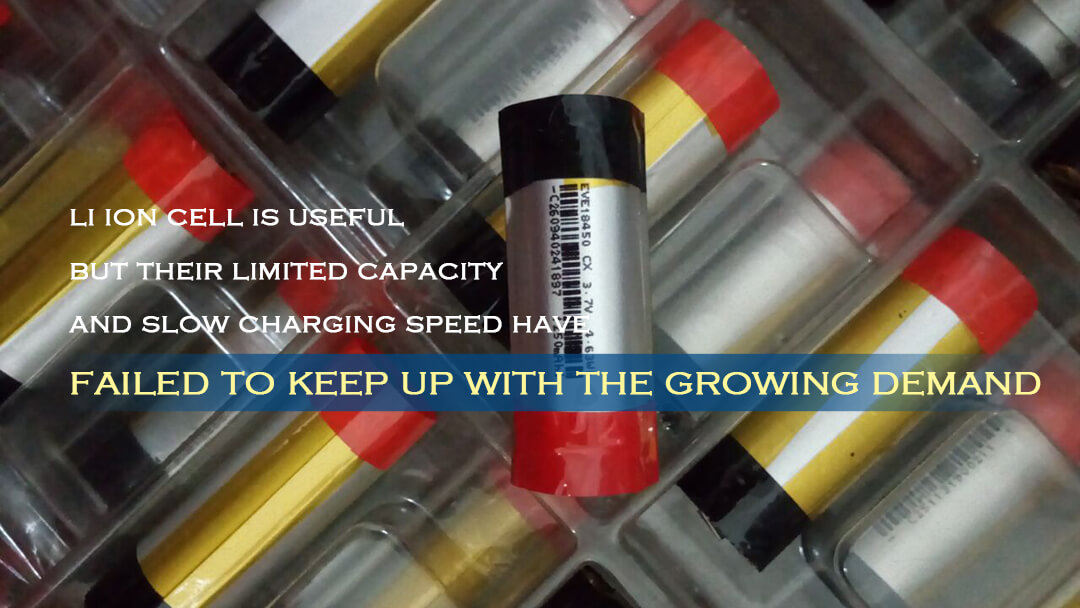 Even considering the less than 40% thermal efficiency of automotive internal combustion engine, there is still a big gap in the endurance of electric vehicles compared with fuel vehicles.

In recent years, reducing cost, increasing safety and increasing capacity are the main objectives of the commercial development of cathode materials.

As mentioned earlier, the cathode material can be thought of as a building containing li ions, which can only store energy, while the layered frame material only provides support.

Therefore, in theory, from the perspective of cost reduction, on the one hand, the expensive layered frame can be replaced with low-cost materials, just like the pure marble house is replaced with concrete; On the other hand, consider packing more li ions per unit volume of material, like converting a separate office into a cubicle.

For example, the ternary cathode material (NCM), which has been widely used at present, is a kind of lithium salt (LINI1-X-YCoxMnyo2) composed of nickel, cobalt and manganese oxides, which realizes the effect of filling more li ions in a low cost framework.

However, ternary lithium battery has been faced with safety problems in recent years. The reason is that nickel is easy to produce valency changes during battery charging, which leads to the precipitation of oxygen atoms. The strongly oxidizing oxygen atoms react violently with organic electrolyte to cause cell combustion/explosion. 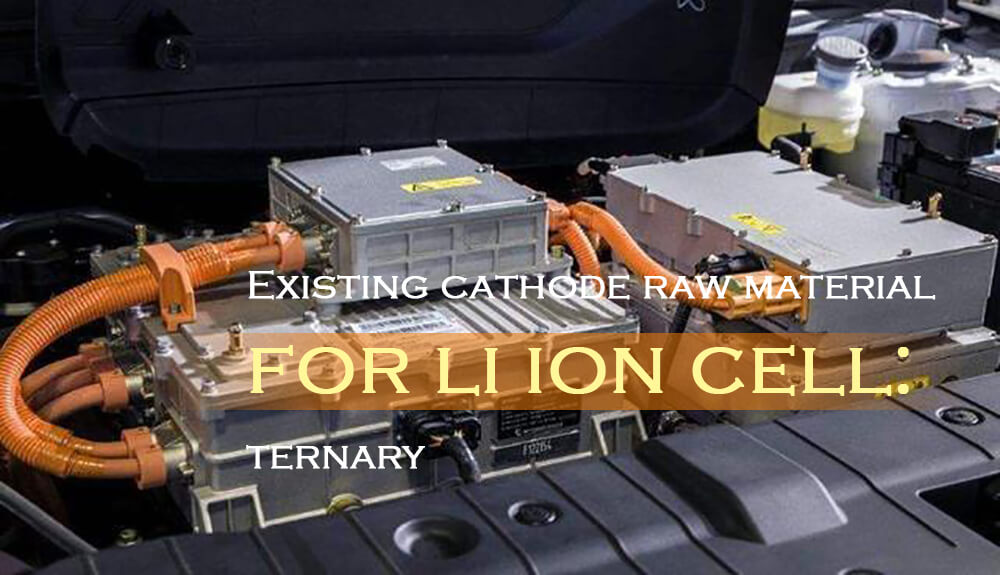 Olivine structures can be analogous to adding additional structural support to a large flat layer to store li ions in separate “cells”. Due to the sufficient support around each single room, the battery is not prone to floor collapse in use, which greatly improves the cell safety.

However, the trouble is that because li ions “lie flat”in the living environment that is too “comfortable”, the lithium ion embedded-release process resistance is high, the battery power is low.

Especially in low temperature environment, lithium in and out of the extremely slow, battery capacity may even decay to less than 50%, in cold areas extremely unfriendly to use. In addition, the single-compartment structure further reduces the energy density of the li ion cell.

As mentioned above, it is difficult to truly improve the capacity of cathode materials without abandoning the idea of “embedding li ions into the interlayer/lattice”. 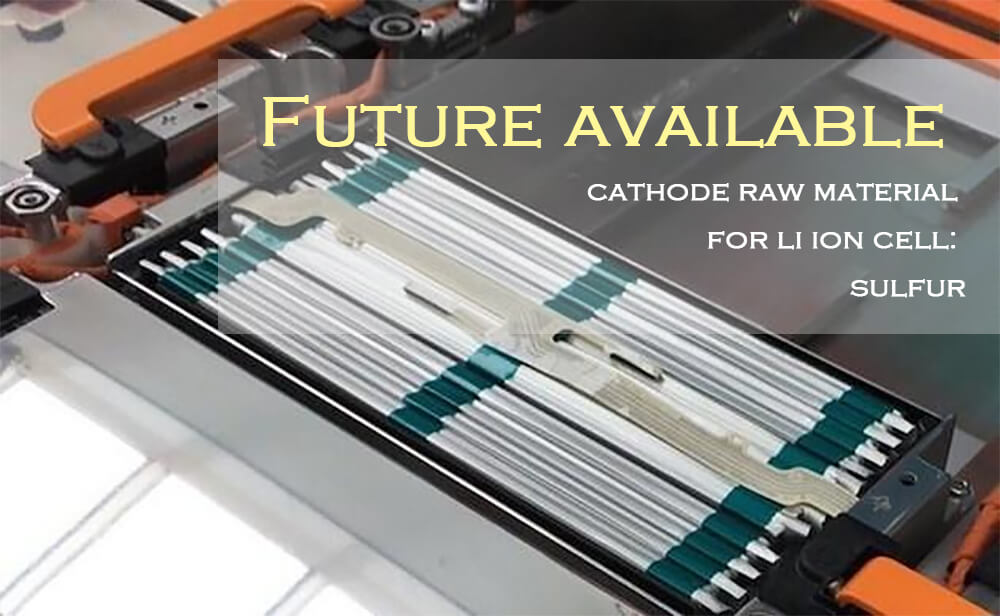 In recent years, the cathode materials based on lithium chemical reaction have been gradually proposed, the typical representative is sulfur (S). Unlike li, sulfur can form a compound Li2S with lithium, which means that each sulfur atom with an atomic weight of 32 can bond with two lithium ions.

The capacity of sulfur can be increased by 10 times compared to existing li metals, and it is considered as a promising next-generation cathode material.

At present, there have been related small-scale commercial products all over the world, and it is believed that they will gradually replace layered lithium materials into the consumer field in the near future.

Next comes the anode material, which is key to the safety of li ion cell.Anyone who has used NimH battery should be familiar with the term “memory effect”.

The memory effect is that if a cell is not fully charged and discharged, it can only use the part of the last cycle in the next charge and discharge, as if remembering the previous experience.

Therefore, in the early stage of using li ion cell, many users habitually charge the battery until it reaches 0% and then unplug it when it reaches 100%. Unfortunately, such an operation can reduce the life of li ion cell and make it more likely to cause battery failure or safety issues. Why is that?

Currently, the anode materials used for li ion cell are mostly based on graphite and other layered carbon materials. The principle is similar to the cathode material, which is to embed li ions between the graphite layers for storage.

Fortunately, the graphite will form a protective film called a solid electrolyte layer (SEI layer) on the side that sticks to the electrolyte during several cycles early in the battery’s life.

This protective film is only nanoscale thick, but has strong toughness and complex composition. It is mainly produced by the chemical reaction between organic electrolyte and li ions on the graphite surface. This SEI layer can lock the graphite and prevent the layer peeling phenomenon. 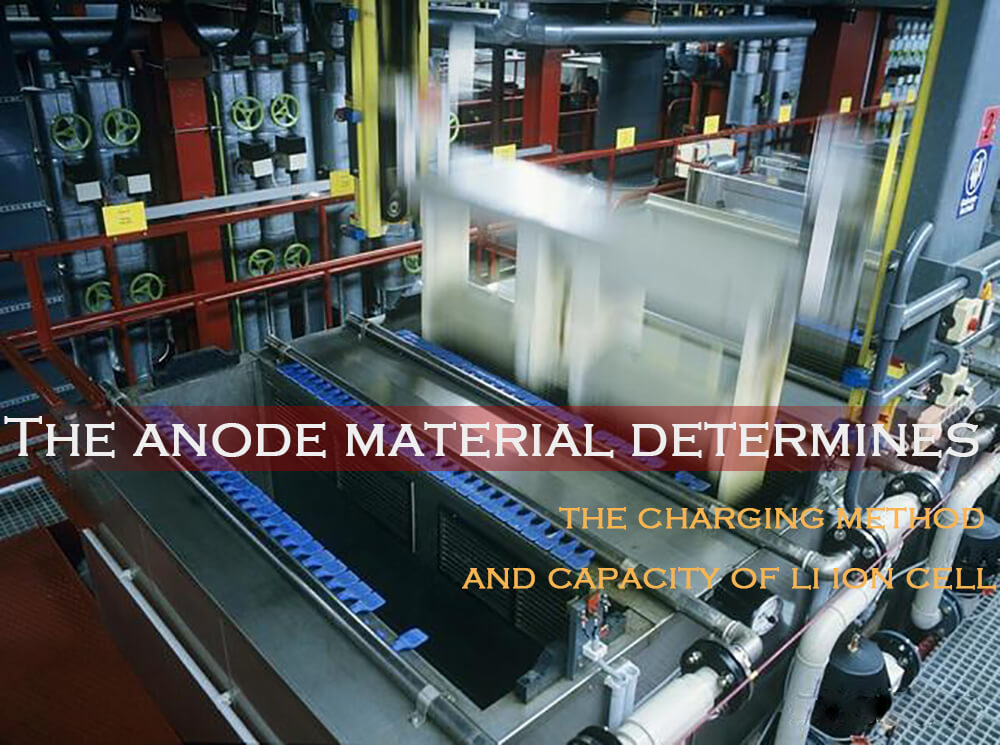 Similarly, if the li ion cell is overcharged, the position between graphite layers has been fully occupied, and the new li ions cannot be embedded, but can only be deposited on the surface of graphite to form lithium metal, which will produce lithium dendrites and pierce through the SEI layer, resulting in the destruction of the SEI layer.

Therefore, from the point of view of cell safety and health, it is recommended that users use device with li ion cell when charging, do not have to wait until the cell is exhausted or have to full fill the cell.

In terms of capacity, it is similar to the layered materials of the cathode. As li ions are also stored in carbon materials such as graphite based on the embedded-release principle, a large amount of mass and space are occupied by graphite that does not provide capacity, so it is imperative to develop new cathode materials.

Compared with li ions, which need to be embedded between two graphite layers in graphite, graphene can directly embed li ions with a monolayer structure, so the capacity is directly doubled. In addition, silicon, tin and other materials can react with li ions to form Li4Si, Li4Sn and other materials, which have greater capacity potential and are currently an important research focus of anode. 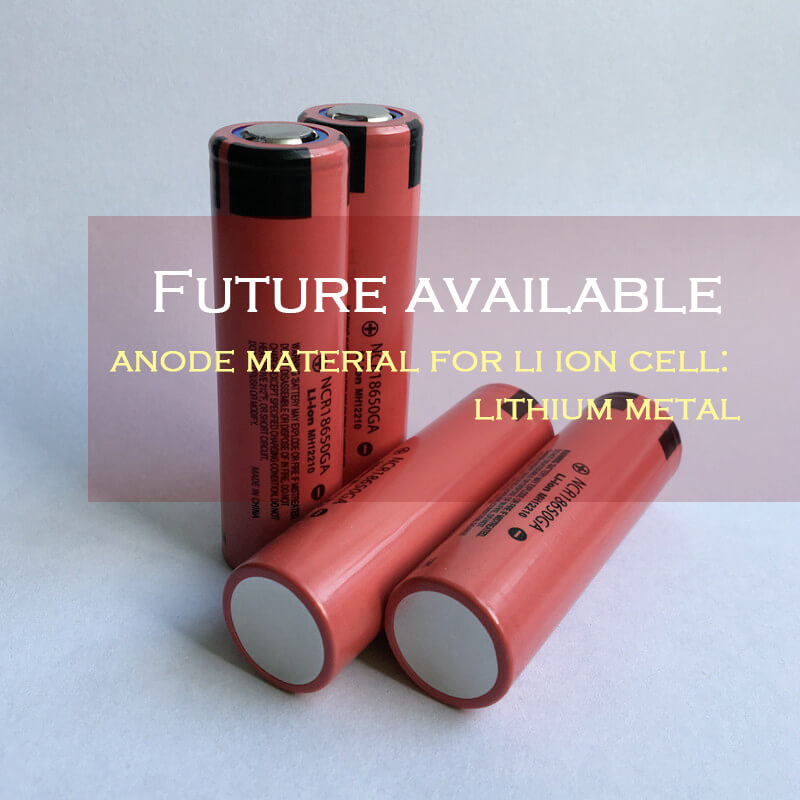 Of more concern to scientists is the lithium anode, which was once dismissed as a safety issue.

The storage of lithium in lithium metal anode is no longer dependent on the insertion and release of li ions in layered materials, but directly reduces li ions to elemental materials for storage, so 100% of the weight and volume of the anode can provide capacity, is the most efficient anode material.

In fact, the earliest li ion cell directly use lithium metal as the anode, but uneven deposition will occur in the cycle process, forming a “tip” of lithium metal, and a stronger electric field is formed around the tip, promoting the subsequent accelerated deposition of lithium ions at the tip.

Therefore, a large number of sharp and fractal lithium dendrites will continue to form, and eventually pierce the battery diaphragm, resulting in battery internal short circuit, battery failure and even safety accidents.The success of lithium metal anode depends largely on the development of solid electrolyte.

Remember the hamburger model of the li ion cell we mentioned earlier? The key to flavor comes from the sauce added at the end. The sauce organically integrates the flavor of bread and meat to achieve the double sublimation of the taste and taste of the hamburger.

If the sauce spills out of the system, it can cause perhaps the biggest safety hazard in hamburger eating — getting your clothes dirty. The same goes for li ion cell.

Liquid electrolytes are the norm for li ion cell

The reason for using liquid electrolytes is that li ions need to migrate between cathode and anode poles to store/release energy, and lithium is reactive, requiring liquid organic solvents for safe operation and efficient transport.

However, flammable organic electrolyte itself brings huge safety risks to li ion cell, especially when lithium metal is used as the anode, the growth of lithium dendrite is easy to cause the battery internal short circuit, resulting in thermal runaway will lead to the volatilization and combustion of organic electrolyte. 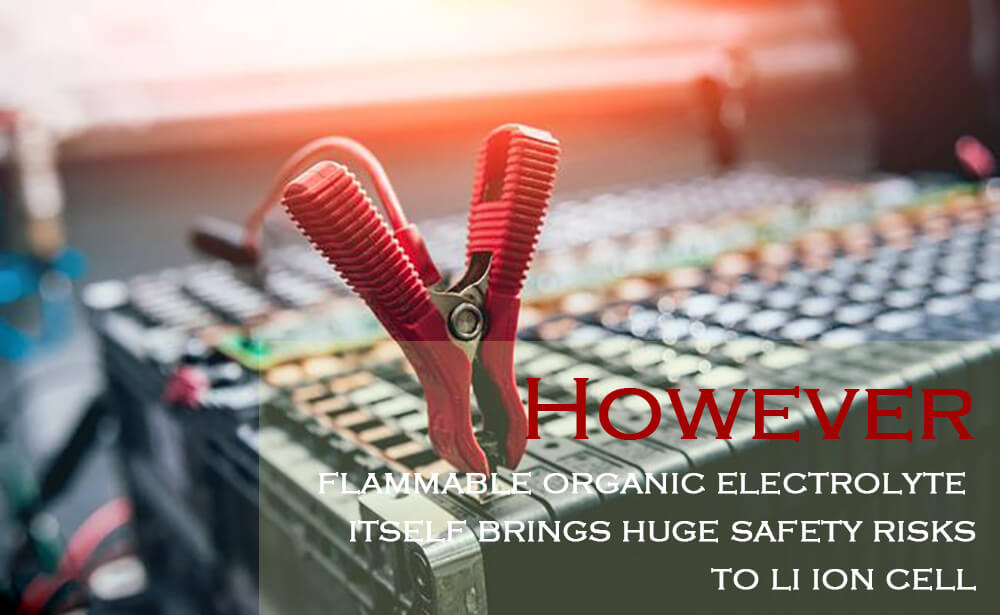 Therefore, the development of solid electrolyte that can conduct li ions not only avoid the use of combustible materials in the battery, but also effectively inhibit the growth of lithium dendrites due to solid electrolyte.

But that’s hard to do, even harder than getting people to accept a burger without sauce.

The primary difficulty is that the migration rate of li ions in solids is difficult to meet the demand. A fish can swim happily in water, but it is difficult to move in ice, and eventually becomes a dead fish.

In order to inhibit the growth of lithium dendrites, they designed a solid electrolyte with five layers of luxury hamburger structure: graphite-LPSCI-LGPS-LPSCI-graphite. This ensures that after 10,000 cycles, the li ion cell still has 82% of its initial capacity.

first of all, it must be scalable, and its energy density must also be taken into account.

When screening and predicting electrodes from a large database, it is necessary to consider whether they can maintain structural stability during the battery cycle and the possibility of synthesis.

for example, lithium titanate (LTO) battery can be applied in the field of quick charge, and has excellent safety and high and low temperature performance.

Batteries that can output different voltages may be better suited for microelectronics applications (such as computer chips), do not require DC-DC conversions, and are easier to integrate with energy-harvesting electronics; The cost of medical batteries may not be the most important, but safety is.

for example, lithium metal as a anode has been widely concerned, but the formation of lithium dendrite has always been a safety hazard, so the development of all-solid state batteries based on solid electrolyte is encouraged.

for example, in lithium-sulfur batteries, sulfur ion S2- is reversibly oxidized to polysulfide and elemental sulfur.

However, when the anion is oxygen ion, the situation is significantly different, which can occur at the same time with cationic REDOX reaction, such as commonly said lithium rich materials, which often cause oxygen loss and structural instability, voltage attenuation is more serious, how to suppress the oxygen loss, to avoid structural changes is the future efforts.

(5) Develop batteries with other alkali metal systems besides Li:

Due to the larger size radius of Na, it has different coordination environment and lattice (for example, graphite cannot contain Na+), and Na salt has higher solubility in SEI. This also means that different electrolyte additives are required.