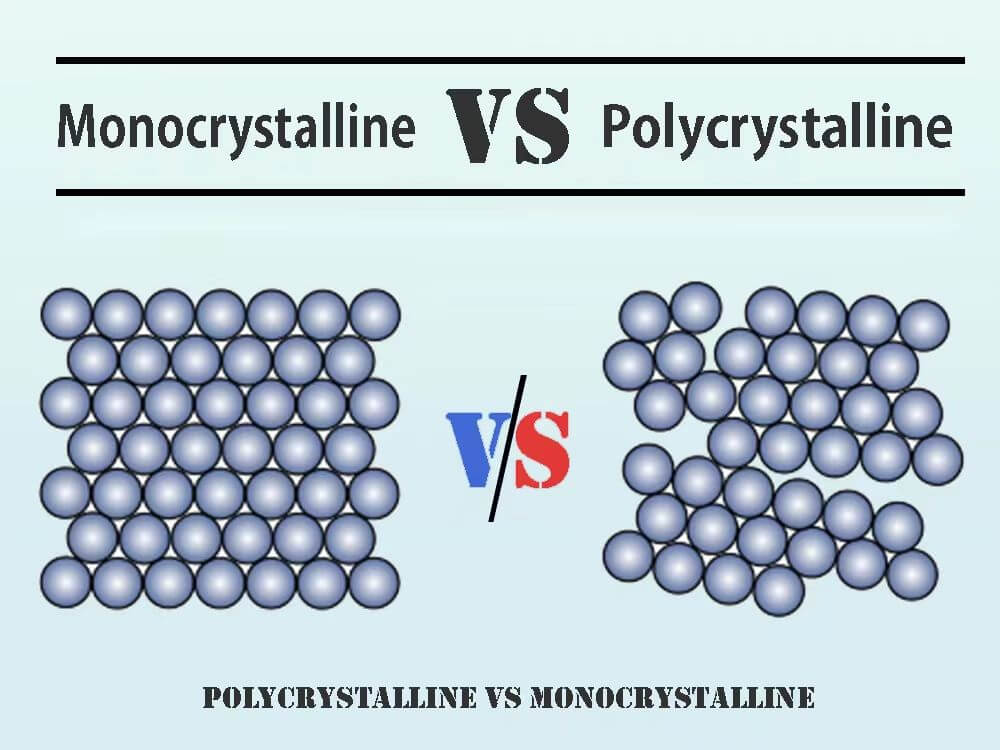 Based on ternary lithium battery cathode material and top 5 cathode ternary material companies technology are continuously upgraded, monocrystalline LiNi1-x-yCoxMnyO2 (NCM, 1-x-y ≥ 0.6) cathode materials are gaining more and more attention. Because of their better structural stability compared to polycrystalline vs monocrystalline based cells, they have a higher cycle life. However, in-depth understanding of the less obvious degradation mechanisms of single-crystal NCMs is still lacking.

However, in-depth understanding of the less obvious degradation mechanisms of single-crystal NCMs is still lacking. Pouch cells with single- and polycrystalline LiNi0.60Co0.20Mn0.20O2 (NCM622) cathodes were compared after 1375 discharge/charge cycles on the graphite anode.

The specific introduction of polycrystalline vs monocrystalline

Quantification of transition metal dissolution on the surface of the cycled graphite anode by time-of-flight mass spectrometry showed that the amount of dissolution of single-crystal NCM622 was greatly reduced. Likewise, quantified by electrochemical mass spectrometry, the carbon dioxide gas evolution of single-crystal NCM622 is also greatly reduced in the first two cycles.

Benefiting from these advantages, the graphite/single crystal NMC622 pouch cell has a cathode areal capacity of 6 mAh cm-2 and a capacity retention rate of 83% after 3000 cycles to 4.2 V. The comparison of polycrystalline vs monocrystalline underscores the potential of monocrystalline NCM622 as a cathode material for next-generation Li-ion batteries. 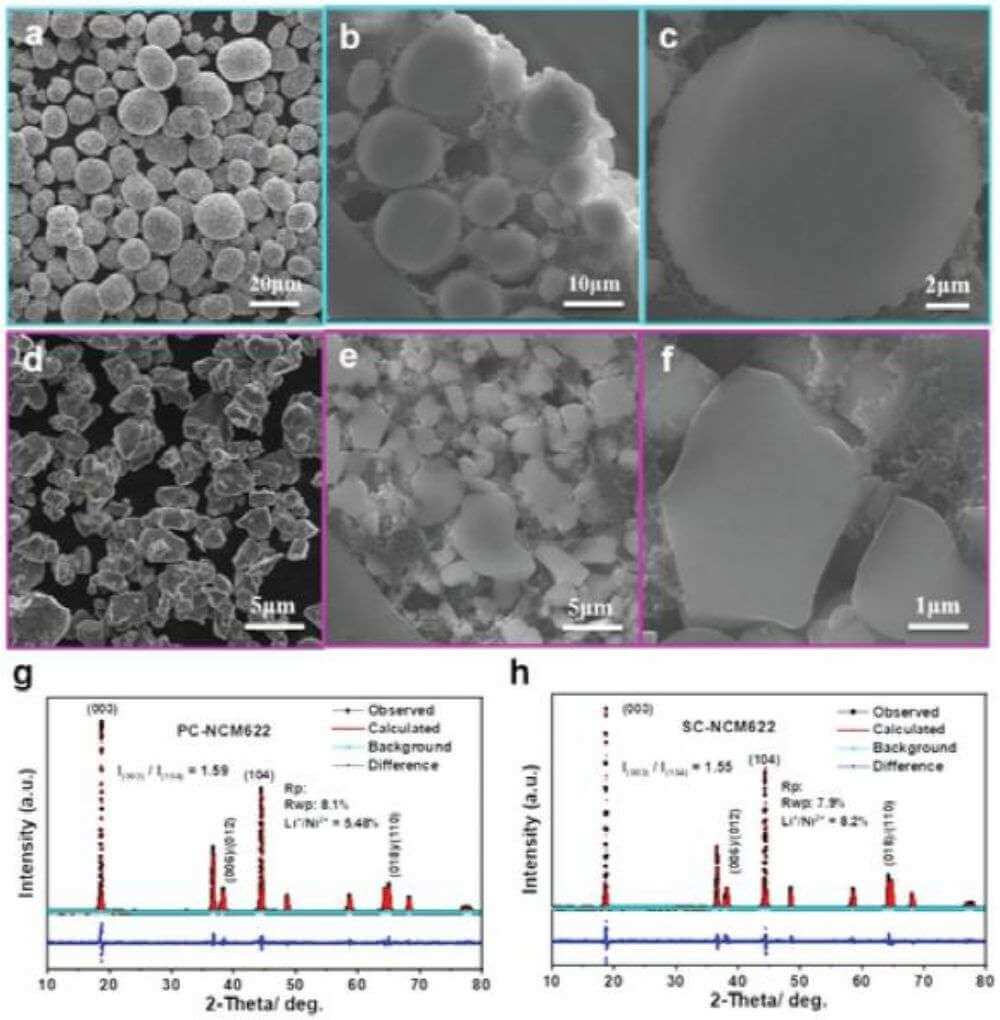 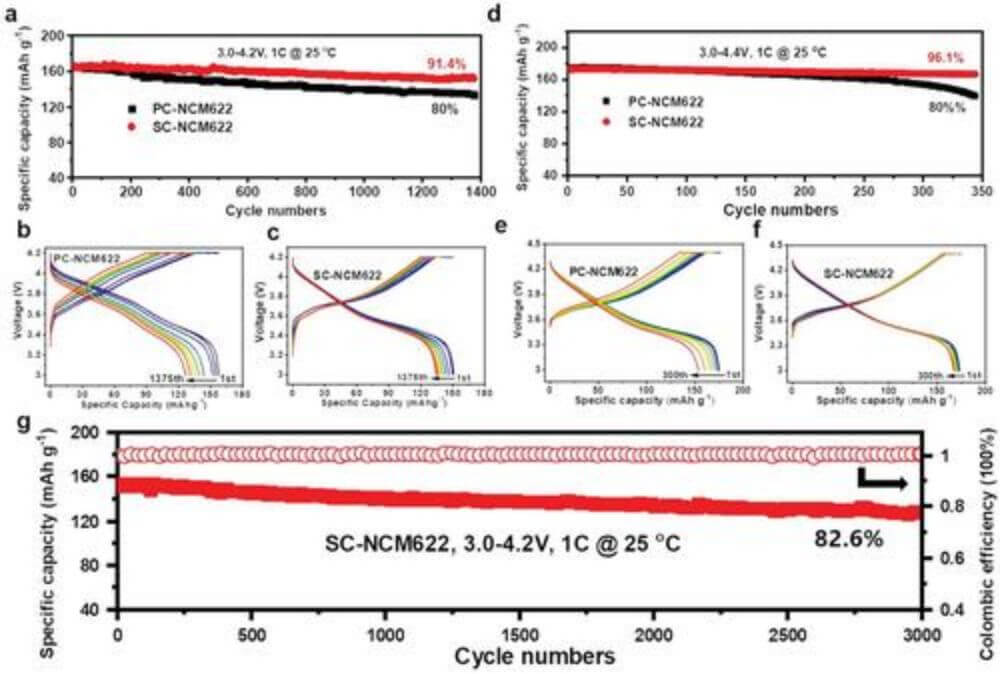 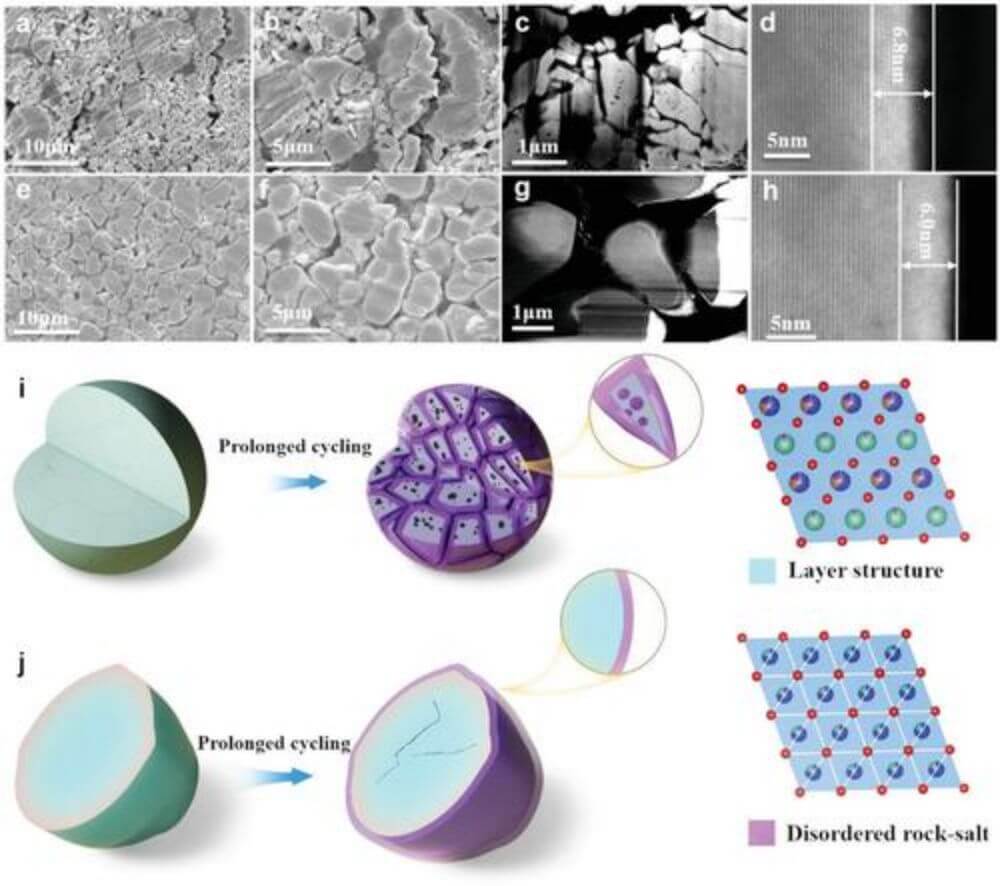 Figure 3a,b shows the ion-milled cross-sectional SEM images of the PC-NCM622 electrode at two different magnifications, showing severe crack formation, resulting in several fully collapsed secondary particles. Therefore, the formation of intergranular cracks is the main reason for the observed capacity fading and voltage polarization. The new surface is exposed to the electrolyte along the crack, exacerbating and accelerating the degradation.

In addition to the cracks, holes can be seen on flakes extracted with a focused ion beam from the cycled PC-NCM622 electrode in the high-angle annular dark-field scanning transmission electron microscopy (HAADF-STEM) image in Fig. 3c.

Interestingly, these cavities are located inside the primary particles, possibly created by the dissolution of transition metals. Particle crushing dominates the voltage polarization in PC-NCM622.

Furthermore, the cationic disordered layer (indicated in purple) is only formed on the surface of the SC-NCM622 particles, but penetrates into the interior of the PC-NCM622 particles along the intergranular cracks entering the electrolyte. 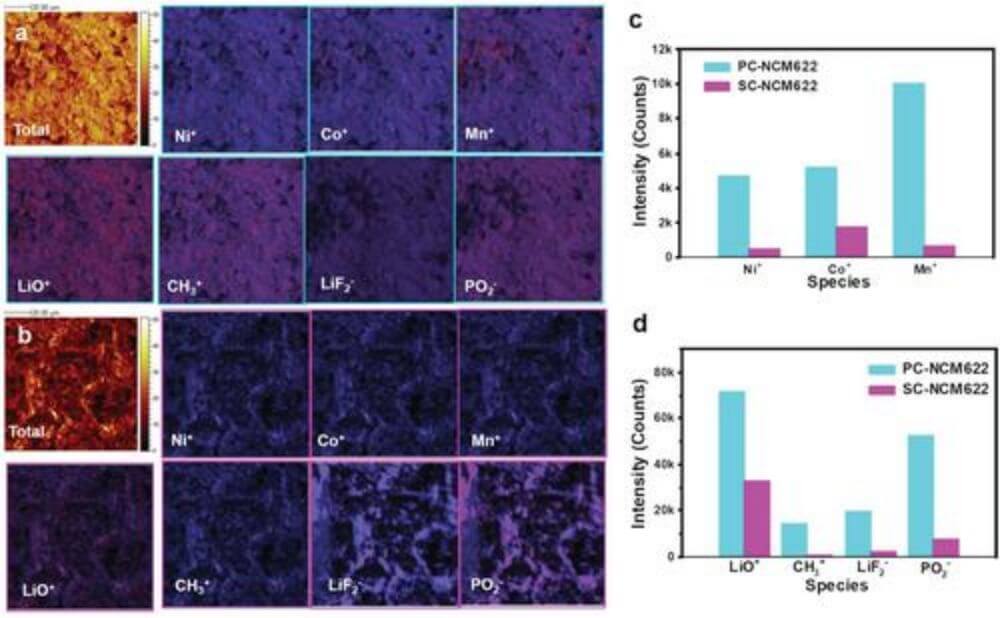 Furthermore, the addition of Ni, Co, and Mn species to the SEI grown on the surface of the graphitic anode increases the electronic conductivity of the SEI, triggering the continuous growth of the SEI and the conversion of active Li to dead Li, thereby reducing the reversible capacity of the battery. 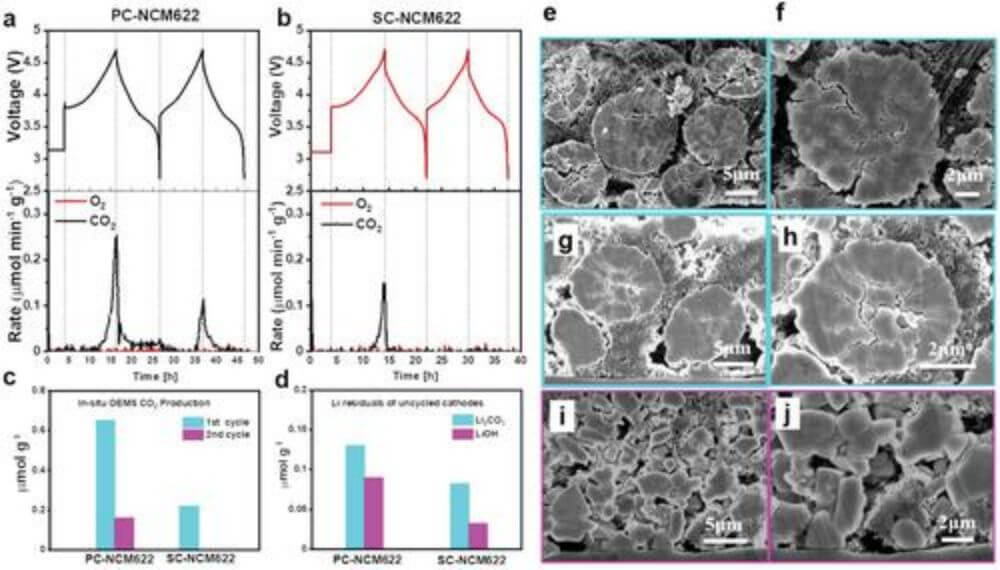 Li2CO3 may be both electrochemically oxidized and chemically decomposed, while LiOH may catalyze the decomposition of ethylene carbonate through a ring-opening process, both of which trigger CO2 release. Compared with the measured amount of SC-NCM622, the total amount of Li2CO3 and LiOH of PC-NCM622 is about 2 times higher. 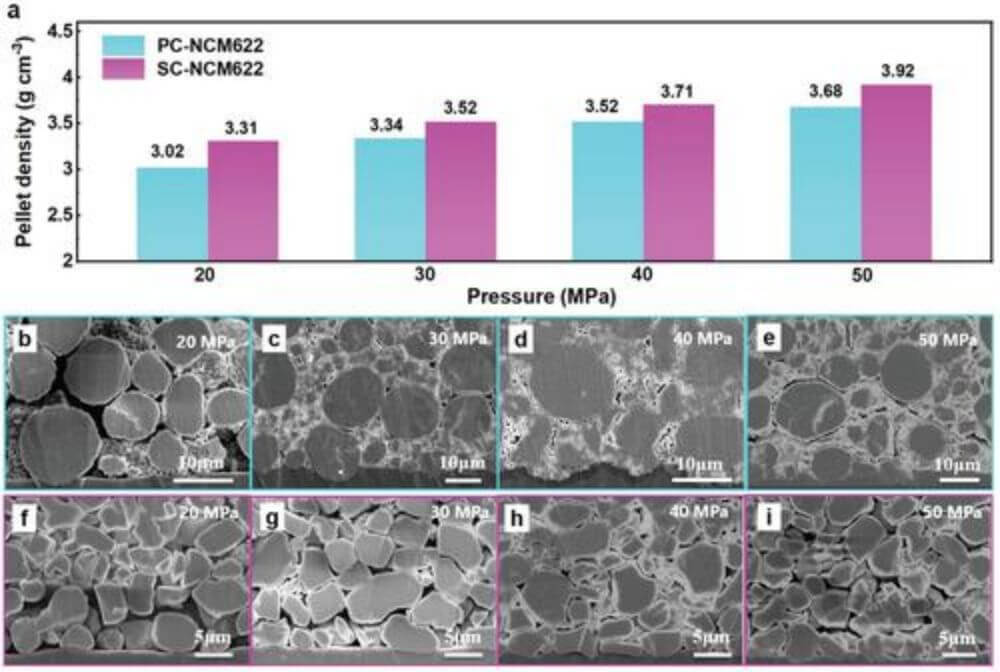 Figure 6-a) Density versus applied pressure, and b-e) cross-sectional SEM images of PC-NCM622 and f-i) SC-NCM622 at different pressures.

1. The 2-4 micron SC-NCM622 particles are more robust to crack formation during cycling than the 10 micron PC-NCM622 particles, making the pouch battery with excellent long-term cycling stability.
2.The thickness of the cationic disordered surface layer of SC-NCM622 and PC-NCM622 is comparable, but for PC-NCM622, the layer also forms along the intergranular cracks.
3.When PC-NCM622 was cycled, the transition metal dissolution detected on the surface of the SEI formed on the graphite was much more pronounced than when SC-NCM622 was cycled.
4.In addition, the voltage polarization of PC-NCM622 increases more rapidly, which is mainly due to particle crushing caused by cracking of PC-NCM622 particles, which is also consistent with the CO evolution observed in the first two cycles.
5.The NCM622 material presented here does not use any dopants or protective layers, which shows that the single crystal method is very effective in mitigating degradation at the cathode level compared to polycrystalline vs monocrystalline.

It is not only the process application of monocrystalline that drives the continuous optimization of ternary cathode materials, but also high nickel and high voltage battery. For more information, please refer to the following related articles. 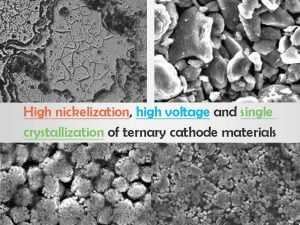 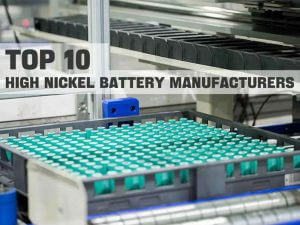 Top 10 high nickel battery manufacturers in the world in 2022 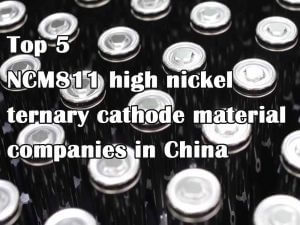